The Tip of the Iceberg

Have you ever thought about anger? Maybe something happened today, it might be on your mind right now as you read this. Maybe or maybe not, but we can all identify with anger and experience it at some point or another.

You may be angry with yourself or your anger may be directed at another person. How do you feel when someone is angry with you? What’s it like when your anger meets theirs? I’m sure we agree that it can often has a compound effect, it just gets bigger and bigger.

Dig a little deeper and the truth of it may be that you’re really feeling hurt or humiliated or rejected or so many other emotions, but you’ve just not realised it. Anger is the big defensive emotion, maybe easier or safer to get in touch with for some of us, but underneath are lots of softer, more vulnerable emotions. 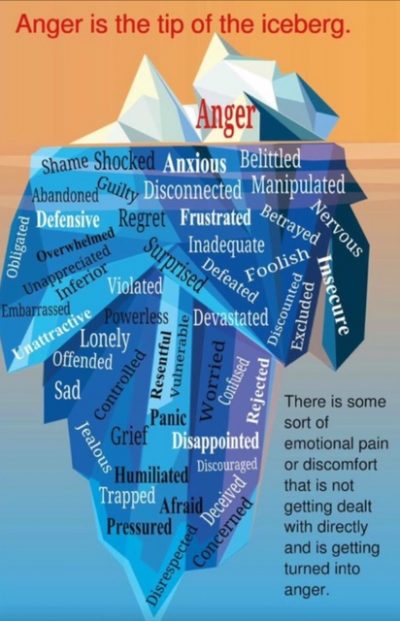 Think of it like anger is the tip of the iceberg, it’s what’s seen from above the waterline. What’s going on underneath the waterline is the big question that’s often explored in the counselling room. It can be a difficult one to answer if you’ve never developed emotional awareness, and if no-one in your growing up years ever asked how you were feeling or helped you to make sense of your tears, your behaviours or reactions.

I find that many people who come for counselling struggle to give their feelings a name, but over time slowly begin to make sense of their emotions. Questions like “When was the first time you remember feeling this way?” sometimes open the door to stories that make complete sense. There’s something very powerful in being listened to in this way and for those feelings to be validated by another. There’s something powerful in being met at the point of your deepest pain and for someone else to “get it”.

Have you ever witnessed something upsetting, even just as an onlooker? I saw a shocking example of road rage recently. The driver got out of his car, approached the “offender” in the other vehicle and went nuts with him. At times like these we often want to make eye contact with a safe other. It’s like saying “did you see that?” Someone else “seeing that” can validate the experience for us.

Imagine it was something much worse, and that in fact you are the one in the middle of the situation. What if there’s no-one making eye contact, no-one saying “I see you, what just happened is bad”? Children, being naturally narcissistic assume that when bad things happen that it’s their fault, that they in fact must be bad. If children believe this from an early age, and no-one helps them to make sense of things, their past can in a sense define their future. There is value in T.S. Elliot’s words, “Time present and time past are both perhaps present in time future, and time future contained in time past.”

We at Glasgow City Mission have a bigger vision than that though. We believe that your past doesn’t have to define your future. As people are seen, listened to, understood, respected and know that we “get them” and even more importantly that God loves them, things can turn out so much differently.