Our staff and volunteers – an appreciation

A few days ago I attended a special barbecue in honour of one of the GCM staff (let’s call him Jim) who was retiring after 23 years of service. A large number of colleagues and volunteers past and present and one or two former guests of the Mission were there (plus several dogs and a selection of very youthful football stars!). The food was good and there was an opportunity to move about, catch up with old friends and, of course, exchange stories with and about Jim.

He was my Monday night Drop-in boss for eight years and, like me, usually worked in the kitchen. He never lost his cool, whatever the emergencies of the moment e.g. the cooker or the dishwasher not working (“Right, we’ll all make sandwiches, have plenty of hot drinks in place of soup and use paper cups and plates. Problem solved.”) and if the person due to deliver the Bible message was unexpectedly absent, Jim just withdrew to a corner, spent five minutes in a quiet trance and then gave an impromptu talk on one of the Psalms which was all the more effective because, of course, he had no notes.  Quietly but persistently he would remind me, when I got irritable about aspects of the dish washing, that we were all members of a Christian team trying to help and encourage each other. He was himself a wonderful example of how to do just that.

With his limp, inseparable “bunnet” and pawky Glasgow wit, he was a kenspeckle figure. My favourite memory of him is from quite soon after I started at the drop-in.  I had been called over to a table by a very distressed elderly man. He clutched my hand and spoke urgently to me but I couldn’t make out what he was saying and he clearly didn’t want more tea or coffee. Eventually, I detached myself, went over to Jim and asked if he could speak to this gentleman. He came at once and I watched. “Well, Willie, how are you doing tonight?” he began soothingly with a warm smile and, putting his hands on Willie’s shoulders he patted him reassuringly and then unobtrusively sorted the buttons of his coat which were wrongly fastened and straightened his scarf. I could see Willie’s whole body relax. He finished his cuppa, and then left with a couple of other guests who promised Jim to take him back to his hostel. “What was it he wanted?” I asked Jim. “Just comfort, really,” said Jim. “It’s bad enough to be homeless but think what it’s like if you’ve got dementia too.” 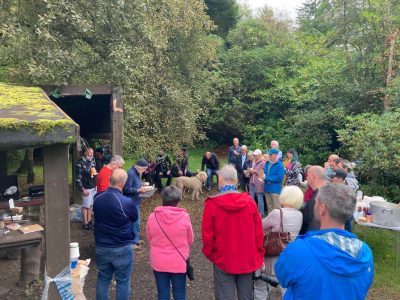 After the food, there were one or two speeches and a presentation, and then Jim himself was invited to speak.  He was clearly a bit dazed by it all and we only got a few of the funny stories he had meant to tell us – like the one about the guy who turned up at the drop-in at 10 p.m. asking  to have his hair trimmed, because he was due in court the next morning and it was only half cut. And when he took his hat off, so it was – on one side of his head long and straggly, on the other completely shaven! So he got the cut, though whether it helped him in court was not disclosed. We laughed, but Jim quickly became serious.  He said that, however difficult (or worse) some of the guests were, he never forgot that he could easily have made the same mistakes in his life and ended up like them. It was only by God’s grace that he had not, he knew – and that was just as true of us all. That was why he had loved his work at the Mission, befriending and helping the outcasts of Glasgow, and felt richly blessed in doing so. Many of us as we listened felt, I am sure, that we and lots of others not present had been richly blessed too, through knowing and working with him.

And the good news is that, although now fully retired, Jim is just going to continue working at the Mission – as a volunteer!