Are We Part of the System?

The story of Joseph in Genesis is a remarkable account of the life of a victim of human trafficking.

Joseph, a precocious little boy, grows up with his brothers and manages to annoy them, primarily by being too clever for his own good. He is also their father’s favourite, and the brothers’ resentment builds up over the years. One day, they see an opportunity to get rid of Joseph.

At first, they think about killing him, but then they decide just to throw him into an empty cistern and leave him there. But then some Ishmaelites come along, and Judah spots an opportunity to make some money. The brothers sell Joseph to the Ishmaelite traders and tell their father that Joseph has been killed by a wild animal.

Joseph is taken to Egypt and sold again, this time to Potiphar, Pharaoh’s captain of the guard. When his organisational talents are recognised, Potiphar makes him in charge of his household. With Joseph in charge, Potiphar doesn’t have to worry about a thing. Joseph’s luck changes when he rejects Potiphar’s wife’s advances, and he ends up in jail.

There too, however, his gifts are recognised, and he is put in charge. He interprets the dreams of two fellow prisoners and, as a result, is asked to interpret Pharaoh’s dreams. He impresses Pharaoh so much that once again Joseph finds himself in a position of authority – this time as Pharaoh’s second-in-command.

Knowing that a famine would come soon, Joseph stores up a lot of grain – so much that people from other countries come to buy grain from him, including his own brothers. The story ends with Joseph extending forgiveness to his brothers and the family is reconciled.

Throughout Christian history, Joseph has been celebrated as a great man who succeeds despite great suffering and forgives those who had done him great wrong. Despite unjust treatment at the hands of others, he keeps his integrity and is an influence for good in a foreign land.

We rightly celebrate this man who refuses to be defeated by adversity. At the same time, we say how wicked his brothers were to treat Joseph the way that they did. In other words, Joseph is seen as all good, and his brothers all bad. 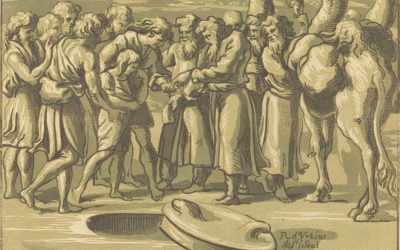 “John Skippe after Raphael, Joseph Sold into Slavery, 1783, chiaroscuro woodcut in gray and black from three blocks on old mount”

But the biblical writers are realistic about human nature and seldom present their characters in black and white terms. There is much that we can learn from delving a bit deeper into Joseph’s story.

In a world in which slavery was the norm, Joseph started out as a victim. He became a commodity to be bought and sold. But even as a slave, he became a man of great wealth and influence. As head of Potiphar’s household and then as Pharaoh’s chief of staff, he had great power and authority. He would have slaves of his own. In other words, Joseph himself became part of the system. He learned to operate within it, and even gained from it personally.

We can’t criticize him for this, of course. The slave system was simply accepted, and it would not have occurred to him to challenge it. And he had to survive – to make the best of a bad lot and look after his own family.

Nowadays, of course, we see things differently. We consider it wrong for one human being to exploit people and treat them as commodities. We cannot, therefore, bring today’s values to condemn Joseph in his time. But the story can help us to examine ourselves and avoid some simplistic, and even dangerous, thinking about slavery and exploitation today.

It is easy for us Christians to think that slavery is perpetuated by bad people “out there” and that it has nothing to do with us. But it isn’t as simple as that. Global trade and supply chains are complex, and slavery continues to be embedded within them. We may not be directly involved in the exploitation of others, but do we make sure that the goods and services we buy have come from a good source? Do we prefer to buy cheap goods without making sure that those who produce them are treated justly? Do we make sure that we invest in businesses we know are ethical (and don’t just claim that they are)? Do we turn a blind eye to exploitation in our own communities?

Whether we like to admit it or not, slavery still exists.

Like Joseph, we have to survive in a complex world. But as followers of Jesus, the one who sets us free, we need to make sure we are not, so far as we are able, complicit in oppression and exploitation.

Let’s not be part of the system!