Our Easter Family Holiday Club in Elder Park went really well. Despite some rain, everyone stayed positive. As one mum said, “This is Glasgow; the kids don’t mind the rain.” The families who came out while it was rainy showed that they really wanted to be part of the club. 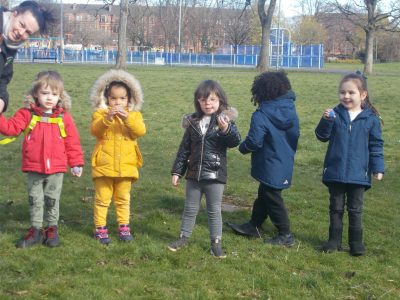 The relationships that were built and deepened over the week are the best results of the Family Holiday Club. Relationships between children and families; children with friends; and volunteers and staff with guests. Some families are international families, who are improving their English at the Child and Family Centre, and some are Scottish families, and everyone was interacting positively with each other. 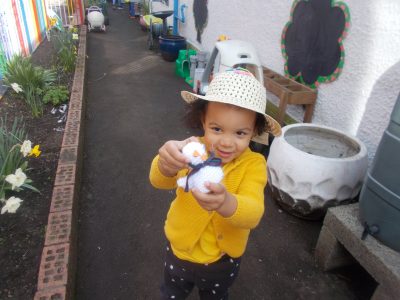 Pastor Wesley from the Church of the Nazarene presented a happy Easter magic show on Monday, which we all enjoyed. He weaved the story of Easter into his show, explaining that when the women came to the tomb where Jesus had been buried on Easter Sunday, the tomb was empty. One amazing trick he had was using a jug of water. He poured some water out and it looked empty, he then put it down and picked up something else, before picking up the jug again and pouring some more water out from the seemingly empty jug. He called Chelsea, a staff member over, and it was exciting to watch him pour the same jug above Chelsea’s head, but she stayed dry, as the jug seemed empty again! Then he poured some water into a cup because the jug was not empty anymore – no one knew how he did the trick!

Each day the children and families had a healthy lunch, crafts and games including an Easter egg hunt. Leeanne, a mum who has been coming to the centre since she was a little girl in nursery, noted, “Having lunch provided is really important because it helps a lot of families.”

On Thursday, the Talent Show was a space for all the children who wanted to perform to take to the stage. The talent was great. We had singing, telling jokes, playing tunes on the recorder and dancing. On Friday, the sunshine was glorious, and everyone enjoyed the puppet show. The puppets were happy to see the children!

We had a great week.