City Missions – At Home and Abroad

Last week some colleagues and myself went to the European Conference of Urban Missions in Northampton. It was great to spend time with people I normally only see at work and wonderful to meet colleagues from all over Europe. We met and heard from people doing the kind of work that we are doing from England, Poland, Sweden, Norway, Czech Republic, Germany……..and even Edinburgh! It’s amazing to think that David Naismith’s work, which started with the founding of Glasgow City Mission in 1826, has now produced similar ministries in countries all over Europe.

It was great to hear what people from all over Europe are doing. In particular, we were struck by those whose lives had been directly impacted by the invasion of Ukraine. Our colleagues in some countries are working directly with thousands of refugees who need physical, emotional and spiritual support. Many of our European colleagues also run care homes, and we heard how difficult it had been for staff and residents when Covid was at its height.

Conferences like these are invaluable. They are informative and encouraging; it is good to be able to learn from one another, offer support and pray together. It is very easy for us to become so involved in what we are doing in our small corner of the world that we begin to think that we are the only people doing this kind of work, and indeed that ours is the only way of doing things! It is easy for us to become insular, but that is not good for us, nor for the people we serve.

Right at the beginning of the church, believers realised how important it is to be in touch with others and to support each other. We see this in one of the letters written by Paul. In his first letter to the Thessalonians, Paul was keen that his churches knew this and worked against it. He tells his church in the Greek city of Thessalonica that he thanks God for them and prays for them continually. He commends work produced by faith, their labour prompted by love, and their endurance inspired by hope in the Lord Jesus Christ (1 Thessalonians 1:3). Paul had founded the church in Thessalonica and had spent time with them. He knew that it was not enough simply to be an evangelist, he had to model what it was to be a follower of Jesus by being transparent in the way that he lived. From him they learned something of what Christian character is. He was their first model, and then they, in turn, became models to others. The result was the Lord’s message rang out all over Greece and beyond (1 Thessalonians 1:8).

In the world of City Missions, David Naismith was the first model of how to serve the most rejected and vulnerable sectors of society. Then others in turn become models of that mission too, not just in the UK but throughout the world. As the result of one man’s work their faith in God, and the message of hope becomes known throughout Europe and beyond. At the conference we saw the work of other City Missions’ –  work produced by their faith, labour promoted by love, and endurance inspired by hope. It was a privilege to be with our colleagues from all over Europe. We look forward to meeting them again in Poland in three years’ time, and in the meantime we, like Paul, will be remembering them in our prayers. 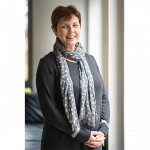